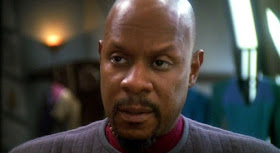 I'm over a year out of date with book reviews but I've now settled into getting some time to catch up on the events of the literary universe. Original Sin was released back at the beginning of 2018 and due to circumstances I just never got round to it which in turn has led to me delaying reading Section 31: Control and The Next Generation's Hearts and Minds.

However, let's focus on the topic at hand. Original Sin marks the first foray (and maybe the last given where the franchise is heading....) into the deep space mission of the Galaxy Class USS Robinson under the command of Captain Benjamin Sisko. Seeking out new life and new civilisations on the other side of the Bajoran wormhole, the former station commander has his wife and young daughter in tow as well as an assembly of new characters to man the stations of the starship.

Writer David R George III (one of my favourites) has a huge blank canvas here since no writer has stepped out of the Alpha Quadrant into the wild unknowns of the deeper Gamma Quadrant. We pick up with the Robinson three months into her voyage of discovery on the other side of the wormhole and as you would expect it's all about to go far less than swimmingly.

Encountering null space and a race of creatures who steal the Robinson's children including young Rebecca Sisko (the "Avatar" to Ben's Emissary), therein lies a complex rescue operation which is interwoven with a flashback to a time on Bajor when Rebecca was abducted once before by an individual obsessed with her relationship to the Prophets.

The great thing with Original Sin is that with very little knowledge of the previous novels from Simon and Schuster you can dive right in and there's no concern that you need to catch up on the rather intensive 20 year back catalogue. It's very much a standalone at this point but with the clear indication that this could be the stepping point into a new series of adventures for Ben Sisko and his crew in the Gamma Quadrant.


It's capably written and certainly accessible but yet I still found that I was wanting more from this one and that's unusual for a David R George III novel after reading quite a fair chunk of them in recent years. I've always felt inspired and wanting more when reading them but with Original Sin I was left a little unfulfilled. In a sense this feels like the start of something new and almost the foundations for some major universe building however there's not been any news of a follow up since it was released or where the direction for Deep Space Nine: Gamma could well be headed. 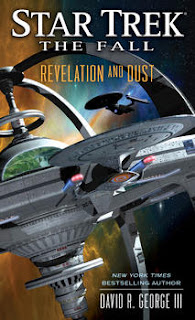 For me David R George III is a master of the bigger picture and the galactic events that have been shaping the Federation - The Fall, Sacraments of Fire and Ascendance have all marked key points within the overall arc of the literary Star Trek universe and this just doesn't seem to meld into any of that. Even Allegiance in Exile for The Original Series tied in with the greater legacy of the franchise but here that sense of inclusion is distinctly absent.

Original Sin is out on its own. For the Robinson that's very true as they begin this monumental voyage but for the author there's not a lot to ground himself with and it kind of shows in the resulting material. Ben and Kasidy of course receive a good amount of text here and that has to, in some degree, be accredited to their presence on screen during Deep Space Nine and as such they are the most realistic characters in the story. Other members of the Robinson entourage do come and go perhaps almost as much as the runabouts they use on the rescue missions but they do tend to be less than memorable by the close of play.

The story itself is very ably paced, flipping from the present to the past and paralleling the two kidnappings as they occur(ed) yet there is very little else to the plot, no deeper story, no "B" to the "A" and without more to the character I just found Original Sin a little pedestrian and a novel that's taken me an age to read. It's OK but that's it and I'd easily place it as my least enjoyed David R George III Star Trek novel. There's no background to get stuck into, no mythology for the author to revel in and draw his audience into which is something I love about his books in the past. Let's just keep our fingers crossed that George III gets a quick return trip to the Alpha Quadrant...