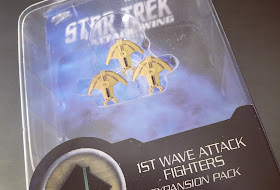 One more long sought expansion comes in the tiny triple form of the Cardassian Fighter Squadron. 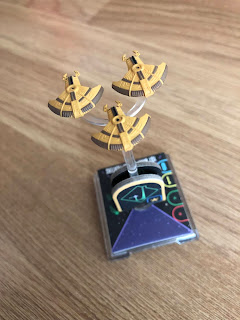 Comprising of three Hideki class ships this is one of the three fighter squadrons available for the game and the last one up for review.

Given these are the smallest items in a range of small ships, the detail on the trio is pretty decent. Each is recognisably a Hideki Class ship with a sandy base coat and a darker brown top coat to pick out the ridges and finery. Again given the size the painting of the highlights is surprisingly clean and defined with all three looking identical. Credit to Wizkids, these could have been abysmal however they've managed to pull off a good result to start us off.

The 1st Wave Attack Fighters initially operate with a six for attack, no defence, one hull and no shields. As with the Federation and Romulan fighter wings, these stats alter as a hull point is eliminated changing both the way the fighters play as well as when due to the decrease in the skill score.

Basic Actions are Evade and Battle Stations with the chance to field up to three of the included Fighter upgrades. During the roll Attack Dice step one of those upgrades can be disabled to increase your attack by one die. Useful to use early on when you can pound in some seven die Combat sessions and cause serious damage quickly.

That might suggest that the speed four maneuver is going to be pressed into service early to make the most of this opportunity. The squadron can tap into a full set of banks and sharp turns at speeds one and two with banks available with speed three and just a straight on with four. The Come About 180 degree turn is available at the cost f an Auxiliary Power Token at speed two. 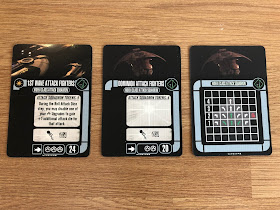 Thinking of their effectiveness early rather than later, the Hideki wing are a first strike weapon to be utilised early and potentially sacrificed early too for the sake of the larger, stronger ships that should be backing them up.

The generic version of the fighters retains the two basic Actions but drops a Squadron Token (starting skill of four) and costs 20 points versus the named option priced up at 24.

For two points you can equip Photo Lock-On which lets you Target Lock during the combat phase of the game if you've not already locked on. Effectively its a very late played free Action benefiting from knowing where your opponent is going to end up before locking on. For two points it's worth a shot early on. 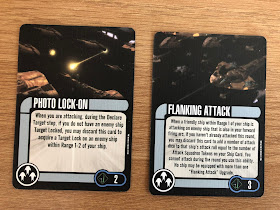 Second and for just three points comes in Flanking Attack which operates at the extremely close quarters of range one. Its one of those situational ones that will happen if you plan it out. Flanking Attack can be used if you have a friendly ship attacking a ship that is also in your forward firing arc. If you’ve not unleashed hell you can add the amount of attack dice equal to your amount of squadron tokens left to that friendly ship’s attack. Potentially that's up to five extra dice from the squadron which could easily take one attack into double figure dice rolling.

Three cards offer upgrades for your Dominion/Cardassian fighters for a cost of four points. Cover Fire balances the pack nicely providing a defensive bonus to add the number of dice equal to your current primary weapon value to counter an attack. Now its apparent that a lot of these cards are at their maximum effect right in the opening gambit of a game - high attack, high defence early on. 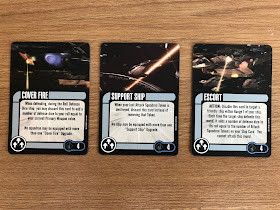 Second in this little group is Support Ship which adds the usual benefit for these Fighter Squadrons of cheating death one final time. Acting as an additional life, it adds a chance to get even or get out of there. Understandably you can only have one equipped!

Third is Escort which is disabled to target a friendly ship within range one. Sacrificing the fighters' attack, the chosen ship can defend with the same number of defence dice as the Fighter Squadron has ship tokens on it's card. Good to see this is reusable as, along with the Flanking Attack you would want to be using this to its full ability early on to support your larger ships in battle. 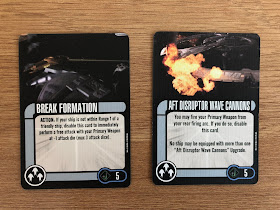 Two five point cards kick off with Break Formation which means you can disable the card and immediately attack during the Action phase of the game but only if you are not within range one of a friendly starship. This free attack will let you roll up to three attack dice although it does also specify that the attack role must be one less die than your normal attack. Both of these points will need to be considered but this gives you the chance to stick in an early attack which might come in handy later in the game as your points start to fall.

Aft Disruptor Wave Cannons  lets you fire the main weapon backwards for another disabled card cost. Only one of these cards can be equipped to your squadron although it's something that can be reused. Problem here would be what would you want to reactivate and what to use because so many of the upgrades carry this feature. 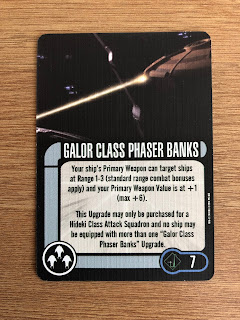 Finally in this pack we have the incredibly expensive Galor Class Phaser Banks. This one costs a whopping seven points and benefits from being continuously in use during the game with no discard or disabling restrictions. Only available for the fighters and only allowing for one set to be placed on your fighters, the power this upgrade adds is of major benefit. Able to target ships in the full one to three arcs, it also adds a die to your primary weapon attack from the word go transforming that initial six dice attack up to a seven.

The included mission scenario, Break Formation is a two player, 200 point battle with one player having to field the Hideki squadron equipped with the Break Formation card. The opposing Federation/Klingon force is attempting to activate the minefield in front of the wormhole (as per A Call to Arms from season five's explosive finale of Deep Space Nine). Each round a mission token is added to their pot to indicate the speed the minefield is being closed off. Both players can win the tokens with the Cardassian/Dominion player picking them up for attacking an enemy ship when not within range two of his or her own fleet or performs the Break Formation ability listed above. 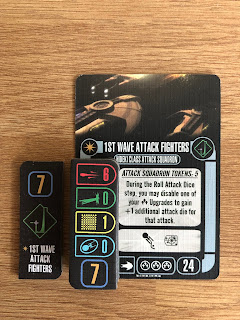 The fight for the tokens can end in one way - total dominance by a single power.

The 1st Wave Fighters pack is an incredibly opportunistic set of upgrades which can, tragically, only be used with these ships. It also seems to suggest that a lot of these upgrades need to be used early for maximum effect virtually signalling that flying these is a suicide mission into the unknown. Having properly looked over the cards it's clear that these fighters were designed to be on the front lines and the first into a combat situation to make the most of their opulent offensive and defensive strategies before taking a more hit-and-run tactic as the stats even out.

Balanced with a great set of cards pertaining to the whole operation, these fighters seem on paper to be the best of the three wings released and definitely an expansion to consider taking into any battle for the Dominion.

Coming soon - reviews of both The Animated Series and Borg Faction packs!

Enjoyed this article? Why not like and share to spread the word and check out our Attack Wing reviews HERE