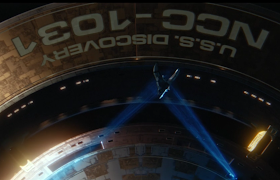 A lost traveller awakens to find himself aboard the USS Discovery but something’s amiss.

The ship is now being run by a sentient computer called Zora and it appears that she is waiting for the crew to return with explicit orders to maintain position - something that the Discovery has been doing for nearly 1000 years. So goes Calypso, the second of the four Short Treks that are feeding our Star Trek desires ahead of the second season in January 2019.

Starring Sonequa Martin Green's other half, Aldis Hodge as ‘Craft’, it's much more of a one man performance than Mary Wiseman’s short last month. My personal belief is that this is what the Short Trek format should be doing; something new exciting and that aspires to be different.  Initially the relationship is one of doctor/patient but as the unspecified period of time passes, it blossoms to friendship and almost something more.

Sprinkled in with references to 20th Century media such as Betty Boop and the Fred Astaire/Audrey Hepburn Funny Face musical, we learn that in 1000 years Alcor 4 is inhabited by humans (never heard of it before!) and that humanity itself has persevered. The reason as to why the Discovery is waiting is never explained nor is how Craft himself ended up in the escape pod although you might surmise that he has escaped from some form of battle given the description of what was on board his one man ship.

Craft is a totally new character to the Star Trek universe and given the time span between Discovery and his lifetime thers a very low to extremely remote possibility that he will ever turn up again but in this 15 minute episode Hodge really brings him to life. There's a family, a mission and a real character that Hodge breathes life into.

Where it does differ from the earlier Tilly-sode is in the questions it raises for the future of the series. Is there, somewhere in here, a bigger plan - an endgame that has begun to sprout? What fate lies ahead for the crew of NCC-1031 and how the blue hell did Craft get from his escape pod and onto the sickbay bed?!

Calypso really stands out as one of Discovery’s best moments, encapsulating the need for human contact, the strong sense of family and a feeling of longing tucked in there as well. Its a brilliantly conceived work that cleverly advances Star Trek canon to its furthest point in the future and still leaves acres of room for storytelling and lore to be built.

The closing moments bring everything captured in this quarter of an hour nicely together around the relationship between the computer and Craft - but does it really tie up anything else? Will this be a trend across the Short Treks and will there be any answers hidden away in season two?

What do you think to the Short Trek stories so far? What are your expectations for the remaining Saru and Mudd installments? Comment below!
Some Kind of Star Trek at 09:05
Share