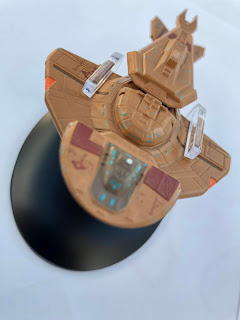 One of those "essential" ships, the Cardassian craft has been one of those entries that fans have been asking about for a long time but has that wait been worth it?   Well, kind of yes.

The Keldon Class is very much the motorhome version of the sleek original with the only major differences being the coffin shaped backpack and the additional fins to the rear. For a variant that appeared in all of three episodes you can understand why the alterations were kept to a minimum, allowing for the extras to be removed and the Galor Class to continue onwards through to What We Leave Behind.

I mean, this is exactly the same as the Galor but let’s examine and see if there have been any significant improvements over the years. To begin with, the bridge module on this one is aligned correctly as, if you recall, my original ship had a wonky forward section. Admittedly this one is straight because it wasn't glued on and I had to set it myself but still, at least everything now lines up.

The paintwork is absolutely a carbon copy of the first release being a muddy brown from bow to stern punctuated with darker brown/purple sections and recessed windows at all points. The panel detail does seem to be more pronounced and identifiable than before and would indicate that, along with other recent ‘redos’ that there has been some adjustment in how the models are finished. The lines stand out much more clearly and you can see the indents and grille areas much more easily than before. 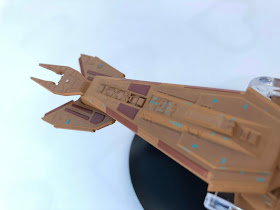 The windows in some cases don’t line up as we have all come to expect but the overall effect of the Keldon Class marks another step up in quality. Where there are a mixture of blues, greys and browns overlapping, especially around the bridge module, the colours have firm lines and each is clearly pronounced on the surface. Out on the curved wing edge, the warp intakes are also noticably sharper and better painted than before with the ridges of the surface again more visible under a thinner layer of paint.

The metal upper half of the craft certainly has the better detail but unusually for such a "later" model in the series it does still seem that the paint has been slopped on a little too thick and some of the final definition is lost. That original coat on the Galor Class sections also contrasts slightly to the plastic pieces notably the topside "coffin" which actually betrays the time difference between the original and this newer kitbash. 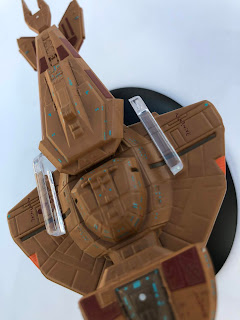 The coffin-top is nicely details, the panelling and fineries are really well finished and stand out because of the improvements in process. Now cleverly the underside plastic half is a slot-on to the metal upper which means that the fins are a simple remould and clip on rather than having to recast the whole damn thing. It's here that you can visibly see the difference in panelling plastic versus metal by comparing the centre section to the curved upper wings.

Personally I love the shape, the design and the finish of the whole thing here but those new pieces are glaringly obvious and could have done with being a little more flush with the Galor Class core of the Cardassian vessel. Finally out at the front is the translucent disruptor adding that final, necessary touch. It looks smaller than the one slapped on the front of issue 14's Cardassian cruiser - and for a further question, all the images of the Galor Class used show it with a blue disruptor bank and the Keldon with red but both models (and on screen) are definitely red. Hmmmm. 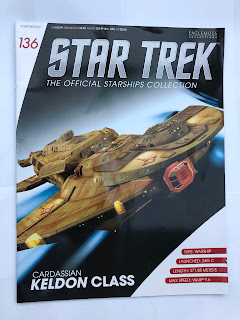 The issue 136 magazine retraces the origins of the class as you would expect by now including the updates made by the Obsidian Order and how the ships featured in the third season of Deep Space Nine. Lots of shots from Defiant and The Die is Cast's seminal space battle that trounced everything Star Trek had done before it. The plan views do emphasise the colour differences between the new and old sections of the model and the plastic versus metal comparisons we've mentioned because everything gels so well on the page.

Perhaps one of the most pointless sections we've had in a magazine for a while is the Keldon Class versus Galor Class Comparison. I mean, seriously, the whole magazine is about the comparison without it being screamed at you in a double-spread page filler. If we really wanted to compare couldn't we just put the two models next to each other?!

Last up is The Dominion Arc which offers a very high level view of the third to seventh seasons of Deep Space Nine with the focus on its main continuing storyline. It's very, very broad in its strokes with a larger leaning towards the third season to tie it into the Keldon Class' two appearances and also to the inclusion of the Cardassians in the arc.

Not a bad magazine but it does feel there's a bit of filler in here rather than quality in some respects, potentially because a lot of the main points would have been covered back with the Galor Class many moons ago. 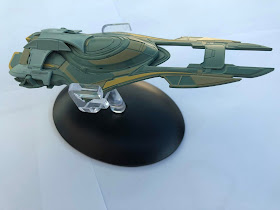 Second out of the Eaglemoss box this time is the Xindi-Primate ship. One of those that you'd be hard pushed to remember from the otherwise excellent third season, this was "aka" Degra's ship and didn't get half the screentime of the other Xindi starships. Quite a shame because this is a pretty neat design for a starship and probably the most interesting of the Xindi craft.

Certainly sleek, the ship combines a green, mustard and grey colour scheme more effectively than you might think into something that is perhaps giving off the impression of being more dangerous than it actually is.

Eaglemoss have wisely crafted the reaching forward blades in plastic leaving the main weight to the back end. It's a design that reminds me distinctly of the speeder bikes from Return of the Jedi more than a Star Trek ship. 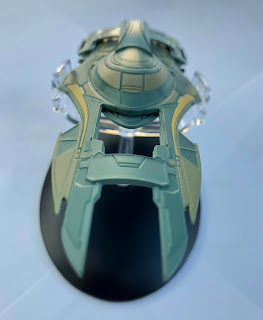 Those forks sweep backwards with some fantastic panel colouring into the main body. There is a bit of flex in the thin(ish) forks and that's to be expected but Eaglemoss have done really well to put the definition into the different segments of the surface here. The sweeping leading edge yellow detail is crisp and the whole upper plastic surface is alive with curved hull shapes however it's worth looking a little more closely as some of the panelling at angle changes doesn't quite line up.

The shape of the Xindi craft is masterly realised here in such a low profiled form with the additional lighter green "spoiler" clipped to the two rear left and right edges plus extending forward to attach smoothly to the rear of the oval, centre, command unit.

Now what makes this model even more impressive is how seamlessly the metal and plastic halves come together. As mentioned, the whole of the top of the ship is rendered in plastic and fits like a glove into the metal section which runs as the oval shaped piece on the underside and then widens out to the whole width of the bottom.

The concave underside sees the metallic elements trade off the colour palette for some raised panelling while the forward sections in plastic retain the yellows, greys and browns over the darker green base coat. 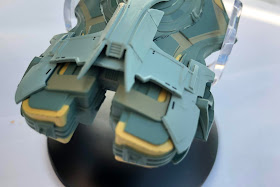 There are no overtly obvious engine emplacements o the surface of the craft to the rear and the finishing detail, if you step back for a second, is actually very simply effected. There are no intricate pieces here, no cutouts or translucent inserts. This is a very basic construct with three core parts which I suspect made it dead easy to recreate in scale.

Finally, the stand fit is just as smooth, gripping around the tips of the curved hull for a centrally balanced pose on that classic Eaglemoss black base. I think the biggest gripe with this one has to be that the magazine cover and the CG within it shouts out that the model is actually very basic in its detail and there are is a lot of pipework and more variation in the height of the plating on the hull than is conveyed through the medium of plastic and metal.

Issue 137 kicks off with a detailed comparison of the ships of the Xindi fleet as well as the key features of the Primate cruiser and its strengths and weaknesses in the field. The magazine CG also highlights the lack of translucent plastics within the rear to bring out the engine exhausts as we've seen on other craft. The painted on look just doesn't cut it here although the choice to go down this route rather than additional pieces of plastic might be down to cost and the fiddliness of putting that together.

The plan views also reinforce how some of the visual elements haven't translated well even more especially those yellowed sections that run along the forward prongs. If I hadn't taken a good look in the magazine I would never have realised that they are linked in to the propulsion systems and aren't just there for hull decoration.

We have four pages then looking at John Eaves' design choices and sketches to do with the creation of this Xindi craft. Eaves' plans also included several different paintjobs plus it's interesting to discover the challenges of negative space in the model world against the CG world. 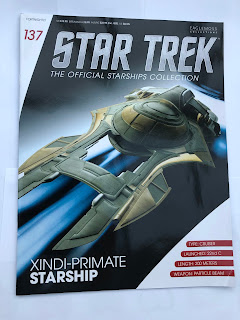 A nice parallel to the Dominion Arc covered in issue 136 is the, rather broad once again, coverage of The Xindi Arc from the third year of Enterprise. I love the concept of that season of Star Trek and this just skims the surface as to why and how it came about plus the highs of the arc and what it meant to the show which, unbeknownst to them, was past its halfway point.

A take it or leave it duo of ships from the collection this time round. Would I have been disappointed not to have them in the set? Probably not that much but the latter does round out the Xindi group and the Keldon Class is an important player in the events of Deep Space Nine's third season. Nice work on both but on the flip side both are definitely missing some annoying details that would have bunked them up the scale. Not Malon Freighter quality but not NX-01 either.

Essential purchases or two to miss from Eaglemoss this month?