State of Fluxx: Cards on the Table

Sorry to say but I am totally addicted to Looney Labs fantastic card game.

At first I wasn’t that fussed. It’s a card game that’s Star Trek. Should be ok. Meh, let’s give it a go. 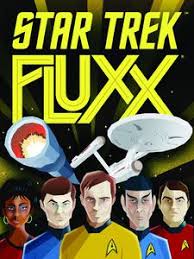 Here’s the basic spin of the game. There’s a 100 card pack in play and each player (up to eight can join in) are initially dealt three cards each.

To start the basic rule is draw a card from the deck and play a card. It’s very straight forward - at least initially. Within the pack are different types of cards - Goals for example are items you need to collect to win the game; Actions are tasks that can be performed during the game; New Rules add a twist to play such as having to play five cards not just one or limiting the number of cards you can hold in your hand.

As you play and new rules get introduced, the dynamic of the game can change a lot. One minute you have nothing to play and the next you have loads to put down but can only play one. It sounds like brain scrambling madness but after a couple of games to get used to some of the plays it becomes incredibly enjoyable and also very, very tactical.

The aim of completing a Goal - which can change from turn to turn by the way - is to collect Keeper cards which feature a piece of Star Trek tech or a character. Each Goal card asks for a combination of two of any of these items and maybe a Creeper. 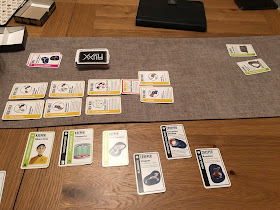 Oh yes. Forgot to mention. Creepers are cards that can stop you from winning by simply possessing them however they may also be your ticket to victory if held in the right combination. You can have the Mirror Universe card combined with a character or the Enterprise or perhaps the Malfunction card linked to the Transporter. Anything is possible which play and winning moves never being the same in any game.

The overall formula of Fluxx may well be generic should you pick any of the other packs available such as Batman, Firefly or even Mathematics(?!) but the Star Trek pack is exceptionally well illustrated and conceived. Character drawings are sharp and even badges are correct to the role. The ships and equipment look like they should and, amazingly there’s even a Fizzbin Action that just about makes sense.

I’ve played this a lot over the last few days and even my six year old has grasped the game and won a couple of rounds through some very devious outmanoeuvring of the Old Man I might add.

At the last meeting of the Stoke on Trent Star Trek Club we held a massive eight player game as the group’s first foray into playing and it was certainly eventful with new rules, Keepers and Creepers flying into the game all over the place. It also meant we were easily distracted and nearly missed the winning play - including the person who put the card down!  Just goes to show that with more players you have to keep your eye on the ball - or cards - very closely.

You do find that the amount of rules in play at some points can become overwhelming and you do end up missing out on the benefits of a couple if you’re not paying attention. Same goes for keeping track of the Goal. With the speed that a new one can be in place you need to keep an eye on your played and unplayed Keeper cards as a couple of times I could have won and hadn’t spotted a combination that I had on the table or Goal card I should have put down to secure victory. 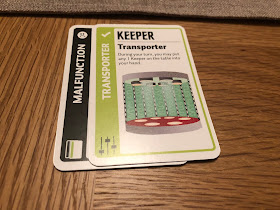 Star Trek Fluxx really made me think and concentrate and the playing time is great for evenings running anywhere upwards of ten minutes dependant on your skill or just how much of a git the players want to be with rules and delaying tactics. While my maximum game time has been around 25 minutes I can imagine a few players have settled in for the long haul.

I absolutely love playing this. It's dead easy to pick up, simple to get into and doesn't require three hours of preparation. Ideal for those nights in the hotel at conventions (Hi DST'ers!) and those rainy evenings at home this winter. 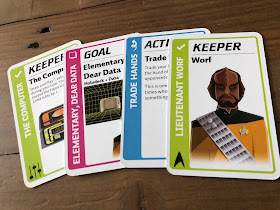 Since original release of this pack...

Adding in The Next Generation pack just makes this game step up to another level. Offering in the Borg, the Enterprise-D crew, 24th Century tech, Romulans and Q, there are two options to go with.

Either a) play this as a separate pack or b) invest in the small foil-wrapped Bridge Expansion and combine the two packs into a huge Fluxx mega-event. Personal opinion; do the latter because you can then get the Deep Space Nine set to play as a smaller single box.

The Next Generation pack on its own plays identically to The Original Series with one exception in that the Fizzbin card is replaced with the Darmok card. Most of the parallel characters have the same actions and you still have the multiple rule changes, resets, actions and beyond. The real fun comes with that Bridge Expansion. Packing just ten additional cards, the set adds in new Goals and a new Keeper meaning that you can play the two as one. Now you can win with two phasers (one from each series), having Kirk and Picard, Spock and Data, two Enterprise's... 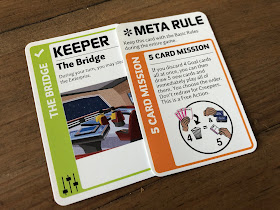 It builds on the single box plus means there are double the opportunities for the changing rule cards and actions to turn up in the deal pile. Also, the expansion introduces the Meta Rule. Along with the Basic Rules card, this one now stays in play; should you end up with a ton of Goal cards (and that will happen with the combining of the two packs) you can now trade in four Goals for five new cards from the deal pile to see if you can improve your hand. This is a brilliant move and keeps the game fresh while playing meaning that you're not just having to play through 20 Goals before you get something that might help you out.

I much prefer the chances on this one and in some respects the odds are better given that "Phaser" as one of the two elements to win can be applied to either of the weapon versions as with tricorders, Enterprise's, communicators and transporters. It's still a challenge because sod's law is that your two communicators are buried three-quarters of the way through the pack when that Goal is played but you really have zero chance of having an inkling of what's coming up. 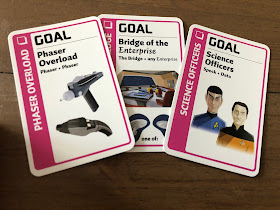 If you just want one pack to play then I would choose the generation of your choice and stop there. If you're addicted after a couple of rounds, definitely get the other pack and the Bridge Expansion - it will blow your gaming mind and give you an even better Fluxx experience. Even with a ton of new cards it's just the best card game to dip in and out of and there's even more coming from Looney Labs in the future which I really, really want to get a hold of!!!

Star Trek Fluxx is available this very second from Looney Labs direct or via one of those popular retail websites we all know and love.